Amazing! Slower traffic moves more cars – because cars can follow each other more closely – and accidents are less likely.

I found this study today, completed by Eero Pasenen from Aalborg University on behalf of the Helsinki Traffic Planning Division.  It has some great findings.  When you look at the graph below it shows that the total miles traveled each year in Helsinki has steeply increased since 1930.  The numbers of deaths caused by automobiles also increased until about 1975 when there was a dramatic reversal and decline of automobile related deaths.  Dr. Pasenen has determined that the vehicular speed limits “has been the most important single factor behind this development.” 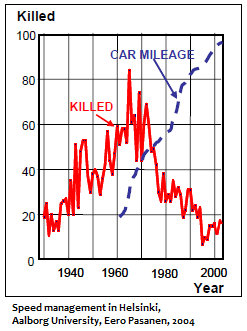 View all posts by karlfun